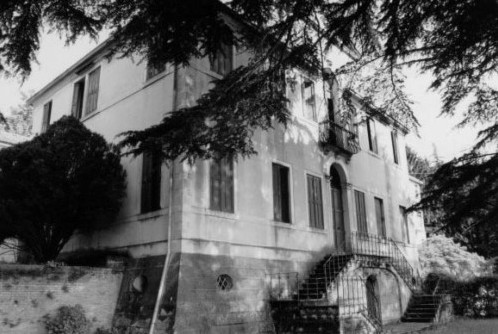 Villa Saggini , called "Mater Dei", of the late eighteenth century, has a rectangular plan and is elevated for two floors above a high base decorated with countersunk ashlar. A staircase with double ramp leads to the entrance. The attached oratory is located on the corner of the courtyard, formed by the rustic buildings behind the villa.
The complex faces the valley of the large park which right in front of the villa insists on a natural terracing of the slope, then supported by stone and brick artefacts. The villa retains the name of the owners Angelo and Francesco Saggini who lived in the nineteenth century. Upon the death of Angelo, mayor of the municipality of Galzignano, the villa passed to the municipality which assigned it for charitable purposes in support of the poor. In the twentieth century the property passed to the Episcopal Seminary of Rovigo which transformed the villa into a place of spiritual retreat. The block behind is built which incorporates the original rustic outbuildings, the barchessa (of which traces of arch rings can be seen on the upstream side) and the oratory, said of the birth of Jesus. A subsequent transfer of ownership of the whole complex brings the villa back into private hands.