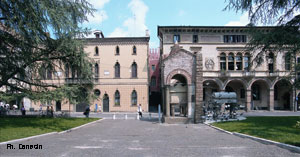 Piazza Antenore, which was only opened in 1937, best represents the evolution of Padua over the centuries through the different architectural testimonies that wind up to this day along the entire axis of Via San Francesco and the neighboring streets.
To the right of the square is the Palazzo della Prefettura, first the seat of the Palazzo di Giustizia and redeveloped only in 1933 with its neo-Renaissance facade. The building rises in part in the area once occupied by the Church and the Monastery of Santo Stefano of the Benedictine nuns (874) and subsequently incorporated by the Church of San Lorenzo, suppressed in 1809 by Napoleonic will. All the objects owned by the Church were sold to a private individual with the obligation, however, to keep the original site of the Tomb of Antenor which at that time was leaning against a wall of the same. After the demolition of the church, the tomb was placed in different parts of Padua, until then returning to the homonymous square where you can admire it today.
It was once believed that this enclosed the remains of the legendary Trojan hero Antenor who according to Virgil founded Padua in 1184 BC In reality, it most likely contains the remains of a Hungarian warrior of the tenth century unearthed in 1274 in the district of San Biagio. The sarcophagus also contained a sword and two vases of gold coins. It was the pre-humanist poet Lovato de Lovati (1240-1309) who saw the remains of Antenor in those remains; a forcing perhaps dictated by his political passion. It is known, in fact, that Petrarch himself called him the greatest Latin poet of his age if he had not mixed the literary with the politician. He dictated the epigraph on the Tomb and ended up buried next to it, still preparing his funeral monument alive. 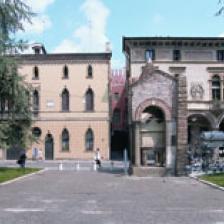