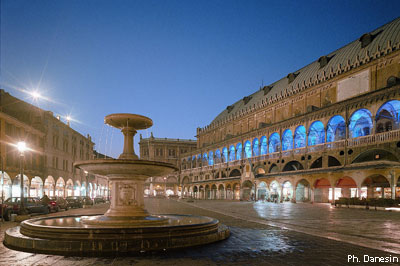 In ancient times it was called "Della Biada" and then "Del Vino" for the markets that were made there. Wrought iron, vegetables, wheat, legumes and bran were also sold. It was considered a center for the sale of low-value goods and under the arcades of the Salone mats and rims were displayed for laundry tubs and barrels. The stairs which led to the Palazzo della Ragione were called the "Scala dei ferri worked", the only one still accessible, and the "Scala del vino", from the name of the products mainly sold in this square.
Here was the arrival of the Corsa del Palio which started from the Volta Barozzo. As a prize the winner was given a silk or palio cloth (hence the name), a goose to the second and third an owl. Lotto numbers were drawn from the balcony of the Palazzo della Ragione. This game had been established by the Venetian Republic in 1734. In the extraction of January 1st, the nuns of the Monastery annexed to the Church of S. Pietro, which was later suppressed, made a big win and had to send money to be taken with a wheelbarrow .
Today in Piazza delle Erbe we can admire the municipal buildings on our left: the sixteenth-century Palazzo del Podestà and the twentieth-century addition where, among other things, a marble plant of Padua is shown with the indication of the 912 bombs that fell during the First World War . We walk along the square along the side of the Salone and note the large sundial of the south facade; in front of us we see the Palazzo delle Debite, from the name of the previous building used as a prison which was accessed directly from the Palazzo della Ragione for a sixteenth-century overpass demolished, together with the prisons, in 1872. The current building, with a large porch of nine arches, is by the architect Camillo Boito (1873).
The square, as in the past, is still home to one of the most picturesque open-air markets, with the stalls of the "scariolanti" covering almost the entire surface, complementing the fourfold row of shops under the Salone. Every morning, around the fountain, which was placed in 1930, the colorful flower stalls adorn and color the square. 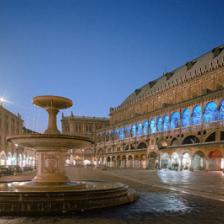